The Little Devil in the Rocks 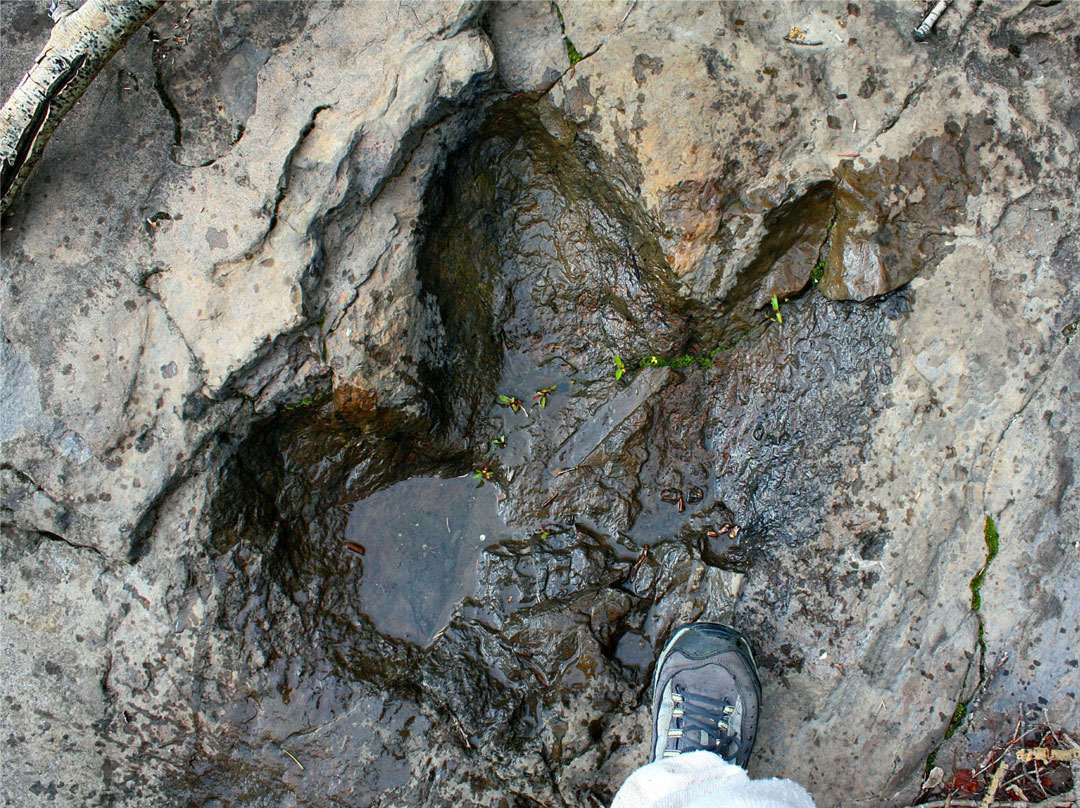 Our area is rich in marine reptile fossils and dinosaur footprints. There is a great deal of useful and relative information on all local finds. However, most of the fossils have been found elsewhere throughout the world and I was looking for something extraordinary.

Enter the “Little Devil in the Rocks”, the Hudsonelpidia, a unique marine reptile famous throughout the world of palaeontology. This exceptional fossil has an interesting local story behind it. The Little Devil was initially located in 1988 by Frank Riter, a local tour boat operator on Williston Lake. Mr. Riter took palaeontologists to the site and because of its proximity to a second, thirty-foot ichthyosaur fossil, they assumed it was a rare baby. Only part of the fossil was exposed and it was located on a fairly steep site on a rock plate that was being forced forward by stress from underlying rocks. Mr. Riter was concerned that winters freeze and thaw cycles would damage the exceptional fossil before the Royal Ontario Museum palaeontologists could recover it.

He called upon friends, Lloyd Gething and Al Hamilton to help him recover it. With a diamond saw borrowed from Jim Vince loaded into Frank’s boat, the three set out on their rescue mission. It took all day to recover the fossil. Al Hamilton was the young man of the group and ran the saw, which required constant blade lubrication. Mr. Gething and Mr. Riter hauled buckets of water up from the lake to pour water into the cut and eventually Mr. Hamilton’s Little Devil was freed and loaded for transport.

The Little Devil rested in Mr. Hamilton’s basement until the palaeontologists returned to make a plaster jacket for him and move him on to the Royal Ontario Museum. Mr. Hamilton said he didn’t think it needed a week to encase the fossil in plaster but that perhaps the lad was being paid by the hour. His intention was that the fossil be given to the Hudson’s Hope Museum and was still indignant that it now resides in Ontario.

Pressure was put on the local Museum to trade it to the ROM as we lack the facilities for scientific study and have no climate control or security measures in place. Mr. Hamilton was quite adamant that if their dating theories are correct and the specimen is some 200 million years old, that, well, perhaps it could endure a few hundred thousand more years inside the local Museum! Instead, the Museum exchanged the original for a casting of the Little Devil, a casting of the Williston Lake Shastasaurus and two other Ichthyosaur castings.

The Little Devil’s scientific name became the Hudsonelpedia, named for the town as elpis in Greek means hope, and it remains unique. No others of its kind have yet been found and the Williston Lake Shastasaurus fossil is still the worlds’ most complete specimen of its kind.

Collecting continues with a large Ichthyosaur skull retrieved by the ROM field research team in 1999 from the Schooler Creek area. The Museum has been promised a casting of that fossil when preparation is complete. The surrounding rock, or matrix is incredibly hard and preparation to cast a fossil is done using miniature jackhammers, air scribes and dental drills.